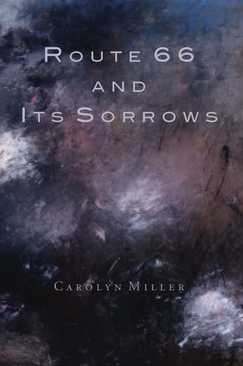 “Carolyn Miller is a lyric poet of redeeming grace and intense clarity. Her poems are grounded in a sense of the marvelous, as if viewing life through a jewel, transforming the dark world of memory and desire into a luminous presence. She is a master of distilled moments. The mood of the poems in Route 66 and Its Sorrows is both elegiac and celebratory. She returns us to what is nurturing in our lives and in the world: ‘everywhere / cicadas and crickets are rasping out their brief sentient lives, / and off in the woods a whip-poor-will keeps calling / that each moment is sweeter and more precious / than any you will ever taste again.’ I read her poems with admiration and deep pleasure.”
—Joseph Stroud
Carolyn Miller grew up in the Missouri Ozarks. Today she lives in San Francisco, where she writes, paints, and works as a free-lance copy editor. Her previous books of poetry are After Cocteau and Light, Moving, both from Sixteen Rivers Press. She is also the author of four letter-press limited-edition books from Protean Press. Her poems have appeared in The Georgia Review, Gettysburg Review, Shenandoah, and Southern Review, as well as in several anthologies, including Garrison Keillor’s Good Poems: American Places. Her work has received the James Boatwright Award for Poetry from Shenandoah and the Rainmaker Award from Zone 3. Her work has also been featured on Poetry Daily,Garrison Keillor’s The Writer’s Almanac, and Ted Kooser’s American Life in Poetry.
www.carolynmillerwords.com “Gerald Fleming is a remarkable writer, made more so by his commitment to the prose poem, a form which at its best, as here, is a delicious treat on almost every occasion. His new volume, One, takes on the monosyllable and wrestles it into dizzying and wonderful pretzel-esque works which may appear, at first glance, non-pretzel-esque. You’ll probably love this book as much as I do.” – Frederick Barthelme

Gerald Fleming’s most recent books are The Choreographer (Sixteen Rivers Press, San Francisco) and Night of Pure Breathing, prose poems (Hanging Loose). From 1995–2000 he edited and published the literary magazine Barnabe Mountain Review, and is currently editing both the limited-edition vitreous magazine One (More) Glass and The Collected Prose and Poetry of Lawrence Fixel. Fleming taught in the San Francisco public schools for thirty-seven years and has written three books for teachers, including Rain, Steam, and Speed (Jossey–Bass/Wiley). He lives part of the year in the San Francisco Bay area and part of the year in Paris.